Smart Modules are a collection of composable smart contracts that you can choose from to begin their journey on the Hyperverse. As long as you are familiar with JavaScript, you can explore and connect Smart Modules to build decentralized apps without having to write a single line of smart contract code.

Hyperverse Smart Modules uses Clone Factory Pattern to create multiple instances of the same contract and a way to keep track of instances and manage them easily. This way Smart Modules achieve multi-tenancy which is a tried and tested model for many Web2 applications.

What is the Factory Pattern?​

It’s a well known programming pattern where we create objects without exposing the creation logic to the client and the client uses the same common interface to create a new type of object. Basically the factory contract should be able to deploy multiple instances of the same contract, store these created instances on the blockchain, and retrieve them when needed.

This pattern deploys multiple instances of the contract without any optimisation to save gas on each deployment.

How Does It Work?​ 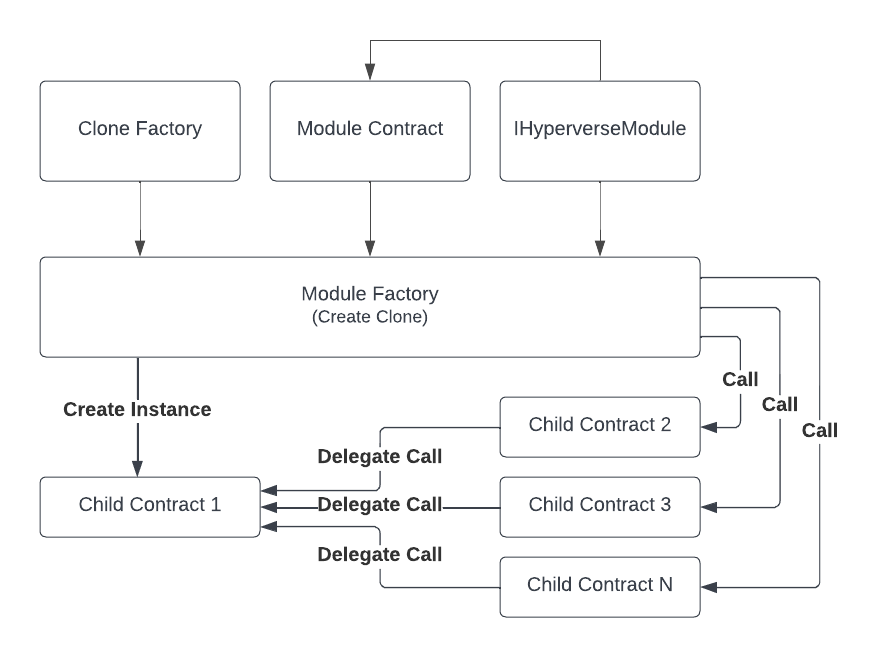 After successfully deploying both contracts, it’s now time to use the Module Factory contract to ‘Create Instance’ by supplying necessary arguments. This will use the Clone Factory contract to create a clone of the master contract, initialize the Tenant state of the clone and sets Tenant data like tenant owner etc.

For questions, comments, and discussions please use our Discord.